Mozilla has released Firefox 4 beta 1, the first public, stable version of its next major browser.  4.1  features a brand new UI with tabs on top (reminiscent of Chrome) but adds more HTML5 support as well as Google’s new WebM open video standard.  Another improvement is that plugins are now both easier to manage and no longer need a browser restart to load. 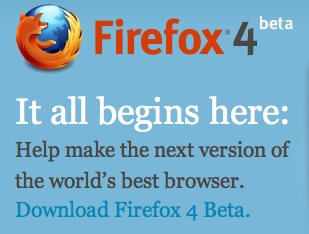 Other features of Firefox for include:

Firefox 4 Beta 1 is available Linux, Mac and Windows systems today.  Mozilla hasn’t indicated when the RC or final build will be released.  For now, we can play with the Beta until a new version comes along.